The Sôgmô’s Constitution Project has issued the first edition of its literature and graphics on Sandus’s unwritten and republican constitution. The project was planned by the 2016 Philia Plan for the Major Societal Shift, a plan that anticipated the Sôgmô’s departure from Kremlum Sandus for graduate school. Now, a year and four months after þess departure, the project has begun.

The plan explained that the Sôgmô will work “to make an interactive infographic of the structure of the Central People’s Government and of the interconnect web of relations between the constitutional organs of the State of Sandus.” That graphic, the plan continues, should “reconstruct the relationships between the many organs of the State of Sandus, their relative hierarchy, and their powers, duties, and jurisdictions.” The graphic will be made available for all Sandum citizens, applicants for citizenship, and individuals interested in Sandus. 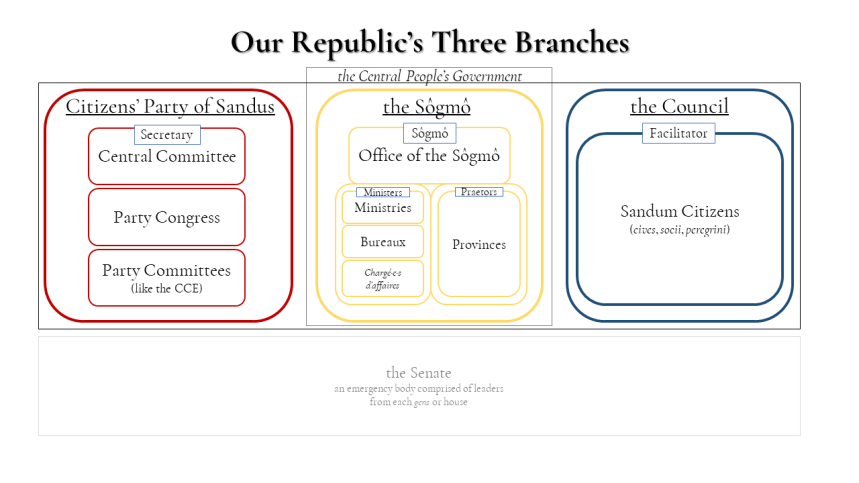 The first graphic in the project is about the general structure of Sandus’s three branches of government, divided into the Citizens’ Party of Sandus, the Central People’s Government, and the Council. It even includes the hypothetical Senate, an emergency body comprised of necessary leaders from each house of Sandum citizens that was planned for in the 2016 Philia Plan for the Major Societal Shift. The body does not exist.

(Note: the Central People’s Government sometimes refers to only the Sôgmô’s branch and also to all three branches, but never to provincial governments.) 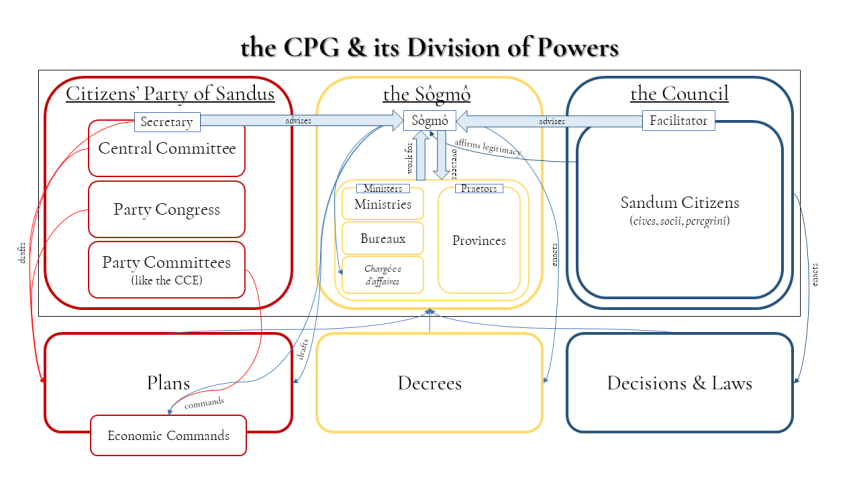 Next is the Central People’s Government and its division of powers. All three have some form of legislation in Sandus: the Party (and the Sôgmô) has state planning, the Sôgmô has decrees, and the Council has its decisions (i.e., resolutions) and laws. In turn, these four types of legislation affect the Sôgmô’s branch, as is made clearer with the next slide.

(Economic commands are treated here and in the next slide as specific economic plans.) 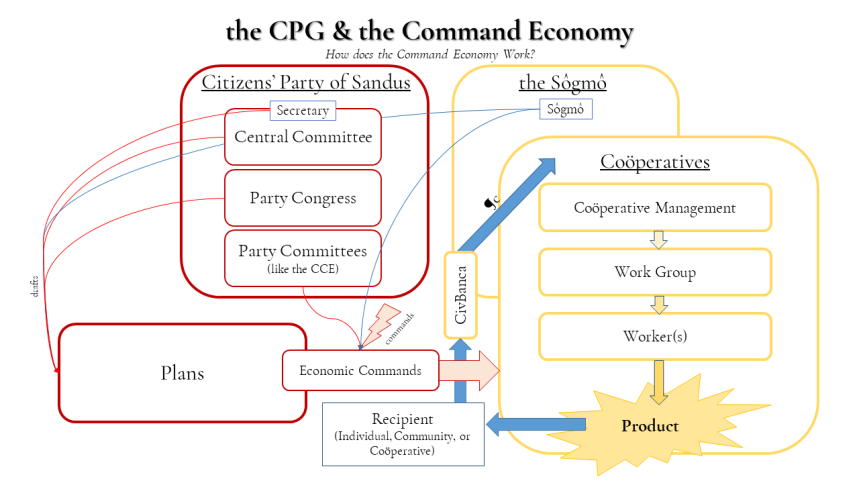 The Sandum command economy, with its coöperatives and workers, falls under the direction of the Sôgmô. Both the Sôgmô and the Party can draft and issue plans and economic commands (both derived from plans and from citizens’ individual or collective needs), which then are sent to coöperatives. Commands flow down the chain of command in coöperatives to individual workers or whole work groups who produce a product that goes to the recipient (an individual, collective, or another coöperative if in an economic chain). That recipient directs CivBanca, Sandus’s bank, to send circulatory persumae to the coöperative to redistribute.

The May 2018 law on succession institutes Sandus’s first law on the succession of the Sôgmô. In it, a process begins with the creation of a caucus of five interreges who are the three top-most Sandum politicians and leaders of the three branches of government (the Party Secretary, the Sôgmô, and the Council’s Facilitator) plus two appointed interreges: one from the Sôgmô and another from both the Party Secretary and the Facilitator.

This caucus creates a long list of candidates in the spring of ever fifth year since Sandus’s creation (2019, 2024, and so on). In the summer, the caucus interviews candidates and creates a final short list of three to five candidates, which is sent to the Party Congress in November to review and to select its top two candidates. Both candidates, then, wage campaigns for the Winter Solstice Election, where Sandum citizens with suffrage (i.e., cives and peregrini who meet the requirement) elect the Heir elected.

The Office of the Sôgmô, which is the top most office of the Central People’s Government, is divided into three major categories: functionary (or ministerial) government, provincial governments, and cooperatives. This slide shows what bodies do exist alongside the three hypothetical divisions.

In the functionary side of the CPG exist one ministry (Diplomatic Affairs), one independent bureau (the Treasury) with its one division (CivBanca), and a separate body of individual chargé(e)s d’affaires (i.e., bureaucrats with specific charges and duties).

There are four provinces in provincial government. They are technically not part of the Central People’s Government but are under the Office of the Sôgmô since Sandus is a unitary state. There are, however, no praetors—either elected or appointed by the Sôgmô.

At the bottom is the “economic branch” of Sandus’s government, since Sandus has a Socialist command economy. Sandus has three economic coöperatives (Tellus Agrarian, Erganê Artisanal, and State Media Coöperatives) as well as one cultural/religious coöperative (the Collegium Sacerdotum, or the “College of Priests”). Only the Collegium Sacerdotum has internal subdivisons with two work groups (known in the college as “sodalities”) and a chain of command of workers (the Sacer Flamen, the major Flamines like the Bishop of the church, and individual members or sacerdotes). 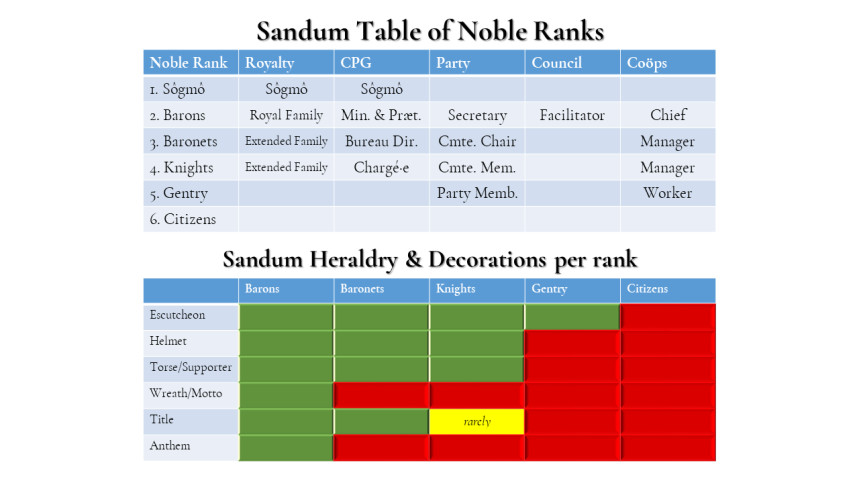 The final slide of the project’s first edition is a rehashing of two appendices of the Sandum system of nobility. In the future, when more entitled and enholden barons and baronets exist, the project will include those titles and all the different decorations in the State of Sandus