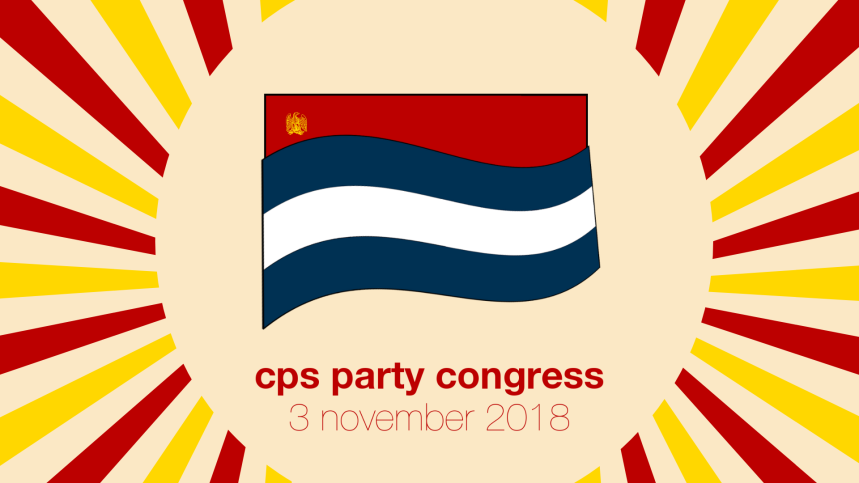 The 2018 CPS Party Congress concluded shortly before 11:00 SLT (UTC-5). Party members held discussion on a range of subjects having to do with a statement from the Party and its organs on white supremacy in the United States and Canada, the Party’s platform and agenda, and on Sandum people as cultural workers. The Party Congress also reëlected Adam von Friedeck for a fourth year as Party Secretary, the longest tenure in Sandus’s history.

The Party Congress began at 8:59 SLT (UTC-5), or 9:59 EDT, with the Party Secretary asking for all those present and playing the Party’s anthem, the Internationale. This was followed by a brief report on the Party Secretary’s activities, where he underwhelmingly noted that his “office has continued to advise the Office of the Sôgmô and the Central People’s Government on wide-ranging issues.” In effect, the Sôgmô recalled, það asks for von Friedeck’s advice on nearly all Sandum matters. His report concluded with a congratulatory message to all Party members.

Each Sandum worker and Party member has carried on this institution’s work in their daily lives. All of you in attendance stand as examples of devoting your time and resources to social productivity, whether through professional employment, academic work, charity, or political organizing. This is how the Sandum Philosophy and Party agenda are truly enacted: the efforts of each citizen-worker to build a more just, enlightened society.

Following the Party Secretary’s report, the Sôgmô presented a statement condemning white supremacy and white nationalism in North America to the congress; the statement was unanimously approved by the Party Congress.

Read the text of the statement here.

Following the statement, the Party Secretary motioned to put the Party’s proposal for a platform on the 2018 Winter Solstice election ballot in December. The platform, which still must be drafted, will focus comprehensively on the Party’s political stance and its vision for Sandus in the future.

Next, the Congress unanimously reëlected Adam von Friedeck as Secretary of the Party, as he was unopposed. He has served in this capacity since 2014 and has seen the successful transition to Sandus’s republican form of government today.

Finally, there was an open discussion on the role of Sandum citizens as “cultural workers” in Sandus, which focused both on the role of Sandus’s cultural economy and on matter realism—first coined by Jacob Barnet, the Diplomatic Affairs Minister. The discussion, which was wide and varied, came up with a list of things that the Sandum government and the Party can do to better include Sandum citizens in our cultural events and holidays. For example, the Party approved of the Sôgmô’s use of parties for Sandum holidays, but recommended adding a virtual component for holidays such as with Google Hangouts. Members also discussed using the events for networking and sharing common values with “Sandum-adjacent” people—a term coined by Adam von Friedeck and which has entered the Central People’s Government’s vocabulary since he visited for the Armilustrium. This term will likely begin to be wrapped up in Sandus’s three forms of citizenship, which range from full citizenship to social citizenship and “auxiliary” or “peregrine” citizenship (both of which do not have suffrage in elections).

In addition, the conversation also focused on other material ways to encourage Sandum people to be cultural workers. The Sôgmô mentioned a previous idea to gift tote bags to Sandum citizens in order to cut down on the number of plastic bags used by citizens. Recently, the Sôgmô purchased and has received Sandum flag pins, which will be given to Sandum citizens ahead of next year’s 10th anniversary. Other specific material items are still pending, but the Sôgmô reiterated that Sandus does give $25 USD to Sandum citizens to celebrate holidays and to keep traditions.

Last of all, near the end of the discussion, members discussed introducing an official tasked especially with events in Sandus and their coordination. This is a job that the Sôgmô stated will go to Sisenna Melville, who is also the bishop of the Ekklēsia. This role, which has not yet been named, will entail checking in with Sandum citizens, coordinating virtual components of holidays, and keeping a list of major Sandum holidays and traditions, as well as other extraordinary components of her job as she sees fit.