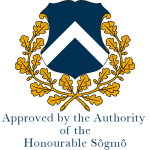 The Honourable Sôgmô Gaius Soergel Publicola has announced that það will pursue a degree to become a Philosophiae Doctor (Ph.D.) at the University of Michigan in the Interdepartmental Program in Greek and Roman History (IPGRH). Það has accepted an offer at the university after having visited in October 2016 and February 2017. The program, jointly funded and administered by the Departments of History and of Classics at the University of Michigan in Ann Arbor, trains scholars in both classical philology and contemporary historical methods befitting its situation as a program between the two academic disciplines.

The decision means that það will leave Kremlum Sandus Province after þess graduation from the University of Maryland in College Park in May with a bachelor of arts (BA) degree in both Classics and History. The decision to leave the immediate jurisdiction of the State of Sandus means new innovations for the State of Sandus and the move has been long anticipated in the State of Sandus. Already, new offices are being constituted and new employees of the Central People’s Government are being hired to partially fill the Sôgmô’s constitutional roles as það prepares to move away from Sandus Proper. Most recently, a scribe has been hired for the Sôgmô and, in the future, það will give up þess constitutional roles tied specifically to Kremlum Sandus Province, such as being the representative of Kremlum Sandus Province. The migration of the Sôgmô, furthermore, will necessitate a new territorial claim to be established on the peninsula of Michigan and a renewed analysis of the territorial claims of the State of Sandus, as well as potential affected parties.

The Sôgmô has served as the president of Kremlum Sandus State College in the State of Sandus, an institution intended to educate Sandum citizens on the State of Sandus, its government, and its culture. The KSSC was made inactive last year as a part of the Philia Plan for the Major Societal Shift.