The former Grand Duke of Francisville and former First Minister of Wasserbrueck, a canton of the former Francillian federal republic, has married today in a private ceremony in Scotland. A one-time GUM chairman from July to October 2009, James Stewart married his partner of several years. They were engaged in April of last year.

Both grooms were married by a pastor with friend and fellow micronational colleague, James von Puchow, in attendance. Congratulations were sent to Stewart and his now-husband from across Europe and North America from his friends.

Images of the day’s festivities will be published with consent and not now out of respect for privacy.

Sandum-Francillian relations go back all the way to 2009. In the summer of 2009, Sandus joined the Grand Unified Micronational and both Sandus and Francisville were close political partners then and over the next few years. In 2014, the Federal Republic of Francisville disbanded, but both the Sôgmô and the former micronationalist have periodically been in contact. After his engagement was announced last April, það sent a congratulatory message to Stewart. 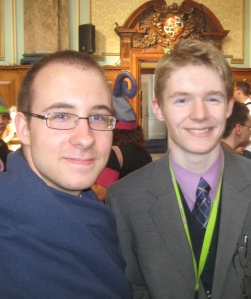 In July 2012, both leaders and several other former GUM micronationalists met in London for the second PoliNation Conference.

Sandus is getting ready for the Veneralia, our holiday of love. Enjoy these tunes to celebrate today’s lovely news!