The winter brought with it more than just the cold this year. Sandum citizens, ever diligent in their multifaceted responsibilities, have been toiling away in their private lives, while the State of Sandus has been working away on the behalf of all of us. At the end of December, Sandus celebrated its traditional cultural events—from the Solstice to Christmas. And let us not mention that the past season has seen more than three New Year celebrations!

January brought with it her annual peace and concord—so that Sandus could labour away for the People’s weal. Sandus joined the GUM as an observer, while we set out to make plans for the momentous occasion of the tenth anniversary of Sandus in May 2019. What is more, the Sôgmô proposed to the council a new law governing the infrastructure related to citizenship and to immigration in Sandus—and this bill became the very first law passed by Sandus in the Council. In March, the first applicant under this new system became a Sandum citizen, raising our population to 13. February likewise saw the momentous occasions of the familiar festivals of the Parentalia, the Feralia, and the Caristia, the first occasion of Sandus celebrating African Diaspora Day, and the seventh anniversary of the Secession.

The past season has seen the increased institutionalisation of Sandum government with members of the Republic taking a diligent part in governance, in pursuance of the spirit of the Plan for the Major Societal Shift. Today, Sandum citizens take an increasingly active and diligent role in their government, and Party members are working carefully yet diligently to complete the Party’s platform. Moreover, Sandum faithful are today diligent in the fulfilment of the free and social endeavour of the State of Sandus—imbuing our State with compassion and diligence in accordance with our duties. With this experience of the budding of Sandum power, we ought to fertilise the ground of Sandum infrastructure and further develop the Sandum nation by all possible means.

A Record of Hours in Winter 2018: Sandum Charity Taxes
The past few years have seen multiple records made on behalf of the Sandum institution of charity taxes, the requirement all citizens have toward donating money or time for compassionate activity toward others–or philanthropy. Derived from the Greek word which means, literally, “love of mankind,” this Sandum institution represents the literal fulfilment of our vows and duty as Sandum citizens—which we undertook the moment we became citizens.

Today marks the third season Sandus has donated over $1,000 USD to charity. Last winter, Sandus donated only $395.60 to charity, while this winter we have donated $1,095.18 to charity and philanthropic causes ranging from religious to environmental, humanitarian, and cultural nonprofit organisations—as well as smaller, individual events.

In addition, the past season has seen a remarkable event for volunteer work in Sandus. One of our citizens, Aaron von Friedeck, has dedicated the last three months to his religious calling, as he will do for the next two years. Aaron’s dedication to his convictions and to the betterment—spiritual and material—of other people recall Sandus’s own philosophical underpinnings. Our philosophy is predicated on the belief that all people in this world suffer. This precept of the Sandum Philosophy is not restricted to any one ideology, people, or religion, but is instead a maxim all people of the world can and should hold on to. It is not a nihilistic maxim, where all our actions are futile, but rather one where we, as one Sovereign People and as individuals with free will, can shape the conditions of our individual lives and of the society and culture around us.

Aaron’s charity does not stand alone, however. All Sandum citizens, from the oldest citizen to the newest, take part in it. This season saw Sandum citizens volunteering 794 hours of their own time to philanthropic causes, ranging from animal welfare organisations and political organisations to museums and shelters. This is the single most amount of hours volunteered in Sandum history, and is greater than the sum of all hours volunteered in the last two years combined. Even without von Friedeck’s mission, this season would have been the second greatest number of hours volunteered on behalf of our love for humanity.

Significant Improvements made to segments of Sandum Infrastructure
As mentioned in the introduction to this report, this past season saw the introduction of a new Sandum law to revamp the processes by which individuals become Sandum citizens. This law did away with the forms that once existed, creating new ones which would weed out applications contrary to Sandum laws. These forms have already had a great effect in significantly reducing the number of applications that must be denied. Moreover, this new law also adopted new mechanisms in Sandus to speed the process along and to ensure that Sandus was bringing in only the most committed, diligent, and intellectual citizens to our national philosophy.

But this law is only one of several actions to revamp Sandum infrastructure. We should also add that efforts are being made to improve this website, develop its pages, edit its information (if it is out of date), and to further clearly explain information related to our country. The website is not the only thing, however, which has been affected by these movements. Sandum media, too, has taken on a new aesthetic form and music popularly used in Sandus has been shared for important holidays. A greater effort has been made to translate Sandum media into all three official languages, in whole or in part, while more media has also been written in languages other than English.

The Council has also been the recipient of the State’s recent drive, and this will likely continue in the coming sessions. The Facilitator is taking over more administrative functions from the Sôgmô, while also encouraging new additions to the Council’s administrative rules—such as his idea of adding a quorum rule to motions passed by the Council.

Sandum government is also developing with more officials underneath the three leading offices of the Sandum Republic. The Sôgmô reorganised, in this season, the chargée d’affaires from the Office of the Sôgmô to the Ministry of Diplomatic Affairs, while also answering directly to the monarch themself.

Like the Sandum functionary, the State’s economic apparatus has also seen an increased interest. The newest Sandum citizen has actively taken an interest in Sandum economic affairs, while also showing an interest in Sandus’s political system. But other citizens, too, are interested in cooperatives. The Collegium itself, Sandus’s oldest cooperative tasked with religious and philosophical affairs, has demonstrated a renewed impetus for new work toward the Sandum Church as well as the newly established Sandum Sangha. Sandus is following the model of countless Socialist countries which have come before us, but is guided by our own philosophy—the bulwark of the Sandum State.

In addition to work done, there is work to do. In the new season, we plan to adopt a rigorous media campaign, revamp Sandus’s propaganda production, and further develop Sandus’s economic potential. It is important here to note that, as it is not guided by capitalist goals of maximising profit and squeezing labour out of workers, Sandus is primarily interested in providing these material and cultural benefits for the integration, development, and advancement of the State of Sandus and the common good. Last of all, the Sôgmô is also planning a new Sagamorial Consideration where það will explain the planning and theory behind an idea of a Sandum judicial or philosophical branch. 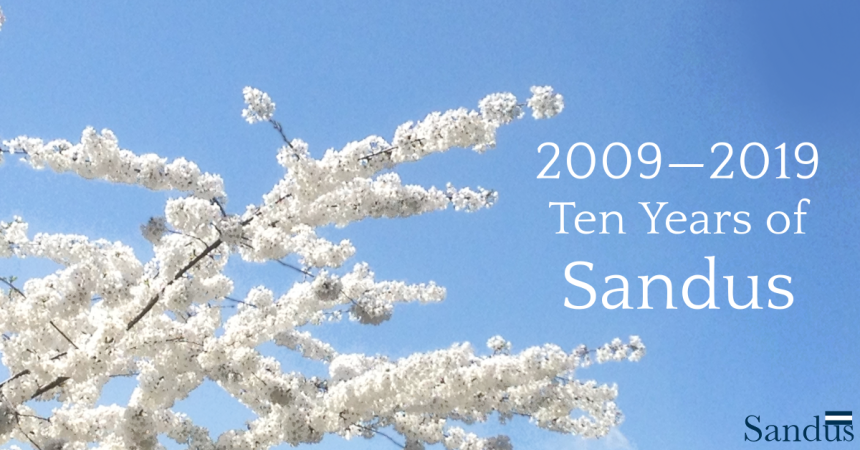 Let the Planning begin! Preparing for the 10th Anniversary
Sandus’s tenth anniversary of existence will be on 26 May 2019, and the Sôgmô has invited all Sandum citizens, those both now and once upon a time, to come visit Quercus Candida and to celebrate Sandus’s first decade of existence. There is also an open invitation for interested friends and allies of the State of Sandus.

Planning will clarify the schedule and the best location for visitors to stay, but dates have already been chosen: 24 – 26 May 2019. Events will include dinners, discussions, tea, and a tour of the new Sandum capital.

Tax Titles: Hatsu Ryuho and Aaron von Friedeck
By a June 2012 decree, the State of Sandus bestows an extra name (agnomen) or title on individuals who have demonstrated a passion for charity and philanthropy. Only once before has a Sandum citizen taken an extra name, Adam Camillus von Friedeck. (Sisenna Melville was also offered one but declined.) Today, the Sôgmô offers two Sandum citizens the distinction of a tax title, one the offer of an agnomen and the other the offer of the title “the Caring.” This notice will be updated if they accept the honour.