V ad VI Martio (5 to 6 March) are the days of Sandum art and architecture for the Sancta Cultural Week. Sandum art is  a mixture predominantly of Classical, Buddhist, and Modern art work, often involving abstractions and natural works. Artwork is primarily made for the celebration of Sandum holidays, a topic which has already been discussed in greater detail here. Socialist realism is also popular in Sandus in reference to key Socialist holidays. Artwork is also made for other purposes beyond holidays, sometimes to relate certain aspects of great importance. Thus, for our discussion of Sandum art, we will look at (1) Sandum Art for Holidays, (2) Sandum Propaganda Artwork, and (3) the Party’s Propaganda Artwork.

A short note on the use of the term propaganda: modern parlance uses ‘propaganda’ in a derogatory sense, but this is not the case here. All artwork and visual media is propaganda — that is, media for the “propagation of a certain belief or message.” This term was first popularised by the Roman Catholic Church under Pope Gregory XV, through use of the “congregation for the propagation of the faith” (congregatio de propaganda fide). In Sandus, propaganda is (1) understood as such so that citizens may use their rational capacities to judge it, and (2) is disseminated for already commonly-held beliefs in Sandus.

Sandum Art for holidays depends on the holiday being celebrated.

For days of recognition — which are specific days to commemorate specific events or causes —, the iconography and motifs used are fairly straight-forward and specific to that cause. Take, for example, the day of recognition for the Annexation of Hawai’i (the Day of Mourning for the Hawai’ian Annexation, 21 August). In the poster below, one can observe the traditional colours of the Kanaka (the Hawai’ian people) and motifs from Hawai’ian culture. The image in the centre is of ‘Iolani Palace, the last seat of the Hawai’ian monarchy before being deposed by Americans, and the palace is draped in black, a universal symbol of mourning. Another example can be World AIDS Day, Labour Day, International Women’s Day, etc. 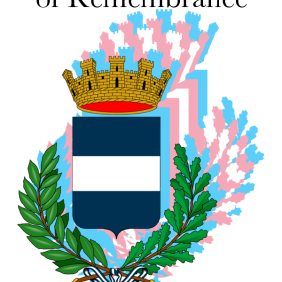 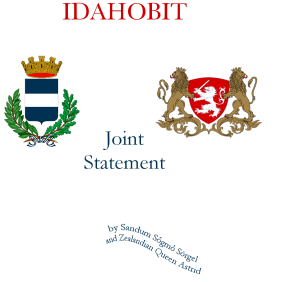 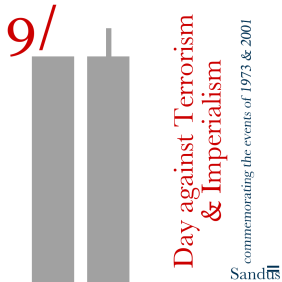 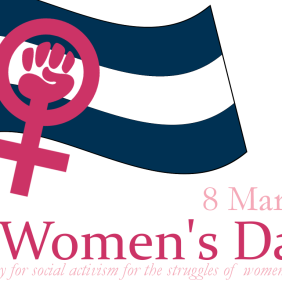 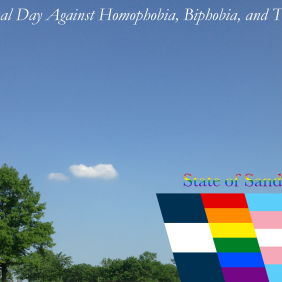 For Sancta and cultural holidays, the artwork depends almost entirely on the holiday being celebrated, the cultural symbols, and the significance of the holiday. An obvious example would be Christmas or Easter and its relationship to the national culture of a macronation. In Anglophone cultures, motifs used in art for Christmas would be Santa Claus, mistletoe, a Christmas tree, holly, candy canes, fruitcake, etc.
But, for us in Sandus, our big cultural holidays include the Armilustrium, Athena’s Day, Saturnalia, Christmas, Losar, and the Quinquatria or Minervalia. It goes without saying that these holidays have their own motifs, often based on the significance of the holiday. The Armilustrium has artwork that places a significance on Roman legionaries, on Mars, and on Athena in her role as a protectress — because the Armilustrium was originally a holiday dedicated to returning legions from Summer campaigns, whereas now it represents the Wintry diplomatic isolation of Sandus and the “closing of the borders.” For this reason, the Armilustrium also features a strong focus on Autumn and the changing of the seasons. Athena’s Day is a celebration of Athena as matron of the state and of arts and crafts, so it shows a more peaceful yet industrious side to her; the colour of the holiday is bronze, after her connection to bronze on this day (the ancient festival is called Khalkeia, from khalkos).
Such is true of all Sancta and cultural holidays, but it is also important to recognise that different symbols and motifs are used because the significance of the holiday changes. Consider this poster for Losar below.

State holidays have their own iconography, symbols, motifs — much like cultural holidays. However, for most State holidays, these are self-created and specific to the State of Sandus, with the exception of the Remembrance Day (9 May) and Labour Day (1 May).  Of the major Spring State Holidays, the common theme is Spring and the change of the seasons. For the Day of Secession (20 February), the Spring motif is referenced in the lavender colour (the holiday’s colour), late-Winter/early-Spring landscapes, and the parallelism with the Dawn-Sun with Early-Spring. For the Day of Foundation (13 April), the Spring motif is referenced in the warm and pastel colours, the cherry blossoms, and flowers associated with the holiday. For the Day of Creation and Sandum Independence Day (26 May), the last of the major Spring State holidays, the motifs typically revolve around the late-Spring scenery and Sandum national symbols. The exception with Remembrance Day (9 May) and Labour Day (1 May) is that the holidays are derived from a pre-established celebration that Sandus established here. Therefore, that is the main difference between the majority of State holidays’ iconography, symbols, and motifs and those of cultural holidays: the State holidays are all formed and established in more recent history, since the creation of Sandus in 2009.

Finally, it should be noted that the distinctions of certain holidays are arbitrary and represent only one dimension. For example, Remembrance Day isn’t just a governmental holiday, it is also a cultural holiday; the Autumn Equinox or Winter Solstice isn’t just a cultural holiday, it’s also an administrative one. Sandum holidays are multidimensional and, in many cases, have an interesting mix of culture and governmental work: to say that a particular holiday is a day of recognition or a cultural holiday reduces the complex, multidimensional facets of that holiday into a single type of holiday — and there are arguments for some holidays why they are two or three of the basic Sandum distinctions of holidays.

Sandum Propaganda Artwork:
Sandum propaganda not associated with holidays is often dedicated to Sandum Socialism or to a specific (historic) diplomatic event. Here are a few examples:

These posters above are for diplomatic or political events and for Socialism primarily, though others are for policies and topics. They do not necessarily have Sandum motifs or symbols, though some do. Above all else, they are intended to argue and influence individuals towards a specific cause, course of action, or stance/message.

The Party’s Propaganda Artwork:
Socialism in Sandus extends beyond just the State of Sandus: it specifically touches the role of the Citizens’ Party of Sandus, which has some use of more unique symbols, iconography, etc. These can be found below: