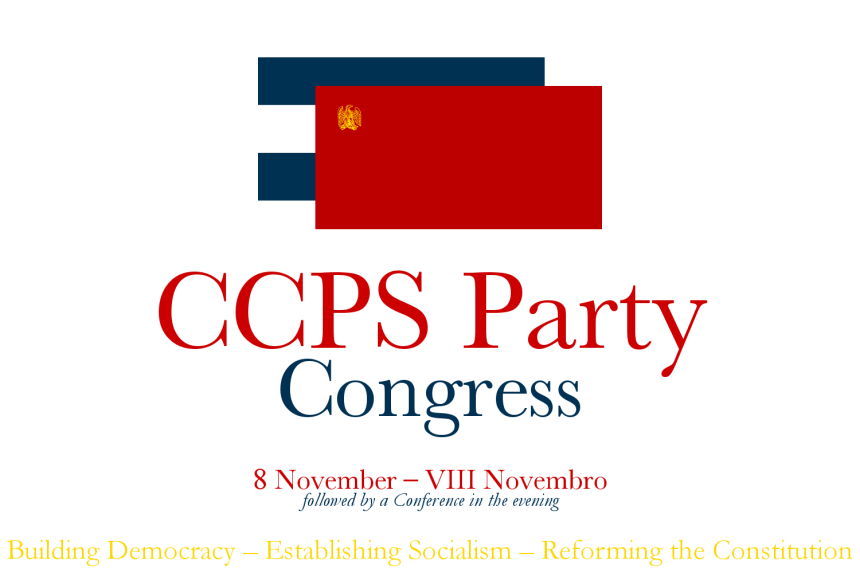 The Citizens’ Communist Party of Sandus has announced plans for the 2014 Party Congress. Under the motto «Building Democracy — Establishing Socialism — Reforming the Constitution», the Acting Secretary Gaius Sörgel P. wrote up the preparations for the Party Congress. The 2014 CCPS Party Congress will take place on 8 November 2014 on Skype, and will be followed with a conference later in the evening.

Following the tradition of the Party’s internal government, the Congress will be open to all Sandum citizens to take part in proceedings, including non-members of the Party; contrary to past traditions of the Party, however, for the first time foreign observers will be able to sit and watch the proceedings of the Congress, albeit in an observer status. The proceedings will begin at 12:00 Sandum Local Time (GMT-5) and will last until the early afternoon; a conference will take place later in the evening at 19:00 Sandum Local Time (GMT-5), which is 7:00pm SLT to commemorate the occasion of the 97th anniversary of the October Revolution. The Party Conference will differ from the Party Congress in the same terms of the previous year, when the Party invited foreign Leftist politicians and delegates to speak on Socialism in their countries, whereas the Party Congresses are for Sandum citizens only – speaking about Sandum issues democratically. The Party Congress’s agenda will be published in the next Sancta week, but the focus of the Party Conference draws on two topics: (1) Socialism in our Micronations with updates on the past year’s revolutionary work, and (2) Socialism and Social Activism through Micronationalism. These topics can be addressed exclusively or an exposé can be made by the delegation of a foreign Leftist party on both topics.

Invitations for guest observers will be sent out within the week and a form will be prepared for others who wish to observe the CCPS Party Congress and Party Conference. Rules will be drawn up before the Congress and the Conference. Uninvited delegations to the CCPS Party Conference can present a report on any of the two topics they desire, and that will be included in the “notes” section of a future attendance form available through the Sandus.org in the near future.

An agenda will be made within the end of the Gregorian week, and will be submitted to Sandum citizens at large to consider any other policies they wish to bring before the Party. Topics expected to be added to the agenda for the first CCPS Party Congress since the Active Citizens crisis of Spring 2012 include: the Sôgmô’s recent «Building Democracy & the Council» Plan; Socialist Economy in Sandus; and Reforms to the Party, a topic concerning the Party after democratic reforms and rebranding and renaming of the Party, a topic proposed by the sitting Acting Secretary Sörgel.

As the Central People’s Government, the Party, and the entire Sovereign People of the State of Sandus prepare for the auspicious occasion of the National Day of Socialism, please visit this page for future notices.