A peaceful people with a pacifist state sitting upon an Arctic island. A Nordic country with a strong agrarian and fishing tradition, Iceland is a wonderful example of a different point of view and a different practice of many of Sandus’s fundamental beliefs and ethics. The Sôgmô’s stay in Keflavík and in Reykjavík marks a new page in cultural advancement in Sandus, both for Icelandic culture and for the research conducted by the Sôgmô on his journey to the Nordic island. Much information has been taken advantage of by the Royal visit to Iceland by the Honourable Sôgmô, especially in the line of culture. The works of Steindór Andersen and Hilmar Örn Hilmarsson in terms of Ásatrú pagan reconstructionism and in terms of rímur poetry are a tremendous influence upon former cultural attempts by the Sôgmô and the Collegio Sacerdae; the Icelandic belief in pacifism are too a guiding spirit of the Sandum nation, as both states share a lack of armed forces. When it comes to honouring the past of the Norse peoples, Sandus joins as it does with the ancient Greeks and ancient Romans in commemorating their achievements and from learning from them to build a new Sandus. This review of the Sôgmô’s visit, which concludes late tomorrow evening at 23:00 GMT when he leaves for Paris, France aboard Icelandair flight 540.

On the flight leaving from Washington Dulles, the Sôgmô read Plutarch’s biography of the Spartan-lawgiver Lycurgus. Taken by the communalism and equality in Sparta, which is quite synonymous with Socialist Sandus, the Sôgmô shall provide a more in-depth report on this topic at a later date.

Landing in Keflavík was eye-opening. The flight to Keflavík was uneventful but, when the plane door opened at Keflavík, all changed. Consistent and strong wind, exacerbated by a lack of trees on the Reykjanes peninsula, greeted the Sôgmô as he stepped off Icelandair’s “Surtsey” 757-200. Upon landing, the Sôgmô took note of a consistent bilingualism of both Icelandic and English; indeed, anywhere one goes, one can speak English and get by. Upon leaving Keflavík, the Sôgmô traveled to Þingvellir, to the north-east of Reykjavík. 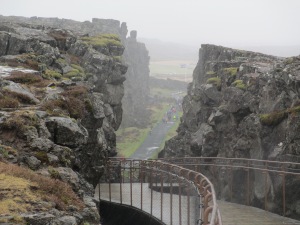 Þingvellir is a site where the Icelandic Alþing once met, until the 19th century when it moved to Reykjavík. Its meeting outside, in the open air, recalls one of a rhetra by Lycurgus, which dictates that the Spartan assemblies shall not meet in a building but in the open air, where they may not be distracted by the beautiful art of the chamber. For us in Sandus, it is not the same concern exactly but, instead, we consider that a building can be plain in providing a lack of distraction; in this, we look to Hallgrímskirkja (the Church of Hallgrímur Pétursson) in central Reykjavík. 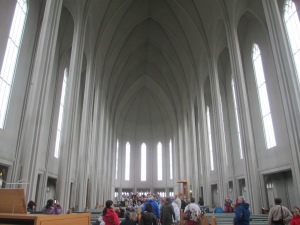 In the modern sense, a church may not be the ideal place for which one considers a law house. But when one considers that the Roman Senate was required to meet in a templum (a sacred space), it does not seem so bizarre. Furthermore, the architecture of Hallgrímskirkja is not only pleasing to the eye, but also meets what Lycurgus warned against: superfluous arts that distract the mind from a clear path to good order and popular welfare. Denoting Iceland’s basalt landscape due to its volcanic nature, Hallgrímskirkja is a wonderful model for Sandus to consider in the future when it should consider building its own law-house for a future Council that will meet to aid the Sôgmô in law (research concerning this Council idea can be derived from that of the study of Sparta and of Lycurgus, a report the Sôgmô with author in the future). 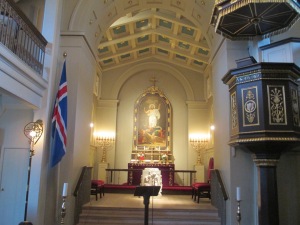 Both Iceland and Sandus share a love of agrarianism. When once considers that Iceland is home to a rich agricultural climate, despite the Arctic stature, this strikes a chord with Sandus where we wish to build a horticultural state even as we may continue to be a micronation in an urban setting. Both environments are not the best for agriculture and, yet, both countries maintain a constant link to their agricultural natures. In Sandus, it is certainly the case to follow the Icelandic and all-over Scandinavian example of agrarianism through the policies of this government.
What is just as striking is the conflict we see in Sandus’s homeland as bordered on all frontiers by the United States, where those who are connected to the land are seen as being conservative, backwards, and reactionary to any social change. Here, in Iceland, progressivism and agrarianism go hand-in-hand and the agrarian society of Iceland is a beacon of hope for agrarian-aspiring Sandus, where our progressive politics guide us.
What is just as telling is the conflict between the two macronations in concerns of tolerance. In a theoretically liberal state such as the United States, one would imagine that same-sex issues would not be so divisive; however, due to the wayward thinking of many Americans, who wrongfully cite their religion as being an excuse for homophobia, this theoretical liberalism does not translate onto society. The irony is that it is in Iceland, a state with a State Church and a church tax, that the Christian faith has coincided with same-sex issues and that the two are not seen as mutually incompatible. In Iceland, a state that has given same-sex couples the same rights as heterosexual married couples since 1996, one can not find a more tolerant people, yet still not forgetting their agrarian roots — a situation so unlike that in North America.

Sandus can indeed learn from the agrarianism and the tolerance of Iceland and, with hope in these, can strengthen Socialism and the Sandum Socialist Society for all citizens in years and generations to come. For both of these unique examples of knowledge, we say takk fyrir, Íslendigar.

As Plutarch wrote:
“Theopompus, when a stranger kept saying, as he showed him kindness, that in his own city he was called a lover of Sparta, remarked: ‘My good Sir, it were better for thee to be called a lover of thine own city.'” However, it is so Lycurgan, who being a man who travelled all of Greece and to Egypt to observe their practices, to be as multicultural and yet so nationalist as Iceland is. What is so interesting to Iceland is that, in addition to being such a tourist-friendly nation where everyone speaks both English and Icelandic, there are many non-Icelandic communities that coincide with the Icelanders. Russians, Thai, Chinese, Indians, Pakistanis, and Greenlanders alike all call Iceland home. The hotel the Sôgmô is staying at tonight is run by Russians; last night, the Sôgmô enjoyed home-cooked Thai food from Thai Icelanders; and so on. However, Iceland is also a very nationalist (considering the traditional point of view of identification, not the reactionary political belief) nation where one can find the image of the flag and of the country nearly everywhere. The achievements of Icelanders, who endure the Arctic climate in daring ways, and their very society are beacons for Sandus, a nation-state aspiring to nationalism and to multi-culturalism (which, for many, is considered to be mutually incompatible, yet Iceland shows them wrong).

With Athena — the Lady of both Athens and Sparta — above, it should be noted how Iceland has no armed forces. No army, no airforce, and no navy call Iceland home. This nation, instead, calls its lögreglan and its coast guard its guardians, a move that is also a leading example for non-militaristic Sandus. In addition to having no armed force, violence of any form is also rare in Iceland — which is too a leading example for Sandus. In lieu of violence, Icelanders thrive on alcohol and coffee consumption in a dreary climate; and, although alcoholism is a problem for Icelanders, Sandus corrects this ill with endorsing alcohol only in mind-awakening and not intoxicating amounts (further focus must be paid in the future towards how Iceland as a nation and as a state correct this, to better examine the issue and the role of alcohol in Sandus — especially if we are to consider alcohol a tool for meditation). Iceland, like other Scandinavian countries, is home to a grand coffee culture. Despite being thousands of miles away from coffee plantations, Iceland is able to sustain itself on the coffee trade, where it attracts coffee which far-exceeds the quality of the comparatively economic-powerhouse of the United States.

Indeed sustainability is a fixture in Iceland. Not only are buildings sustainable, but the people and whole sectors are sustainable themselves. Using geothermal technology, which is invested in the earth of Iceland itself, Iceland is able to live comfortably with warmth and with clean and clear water (despite a bit of sulphur in warm water, due to volcanic activity). Environmentalism is not just a fixture of politics here in Iceland — politics perpetuated by agrarianism — but it is also in the culture and society of Icelander themselves with age-old mythologies of the huldufólk (hidden people, an elf-like people) who simply wish to coexist peacefully with humans and their needs (though this may seem laughable to the outsider, this cultural mythos is important to Iceland and does provide a cultural value on sustainability and self-control and self-constraint — even if the huldufólk are a fixture of commercialism, which is very unlike Sandus).

Finally, the Sôgmô visited a unique and independent record shop called 12 Tónar. It was here that the Sôgmô purchased the most recent album — Stafnbúi –by his favourite Icelandic artist Hilmar Örn Hilmarsson. In this album, Steindór Andersen recites the lyrical poetry of rímur, a sort of half-sung half-spoken poetry based upon rhyming meter. Upon review, the Sôgmô noted that this sort of music was what he had envisioned for a sort of style for hymns and odes from the Collegio Sacerdae. In the future, the Sôgmô hopes to explore the genre further to make a Sandum variant, considering it independent due to an independent conception and an independent birth yet — like all things Sandum — heavily influenced from Iceland. The Collegio Sacerdae may explore this subject further at a later date

The Sôgmô’s plane travelled above the idyllic visionary landscape of Anticosti. Anticosti is a cultural image of an ideal agrarian community in Sandus and it inspires us to work for an independent nation. The story of the Sôgmô’s trip to Iceland shall be instrumental in the nation’s further and continuous advancement.

The Sôgmô leaves late tomorrow evening from Keflavík for France. Should further information on Iceland and its magnification of the Sandum culture and society come to pass, it shall be expressed at a later date. None the less, it should suffice to say that this trip to Iceland — though lasting two nights and three days of the Sôgmô’s 18-day vacation — has been both informative and instrumental to the Sôgmô’s education that will aid in the building of Sandus. We are certainly grateful both to the Icelandic state and to the Icelandic nation for its kind and generous hospitality. We shall take our lessons and tutorials of governance and culture from Iceland and apply it faithfully and whole-heartedly to our Nation-State of Sandus.

For the pursuit of the People’s Weal of the Sandum Nation and for the Advancement under Philia,

3 replies to Report: Iceland — a Model for Sandus