or, the Sacred War shall live on 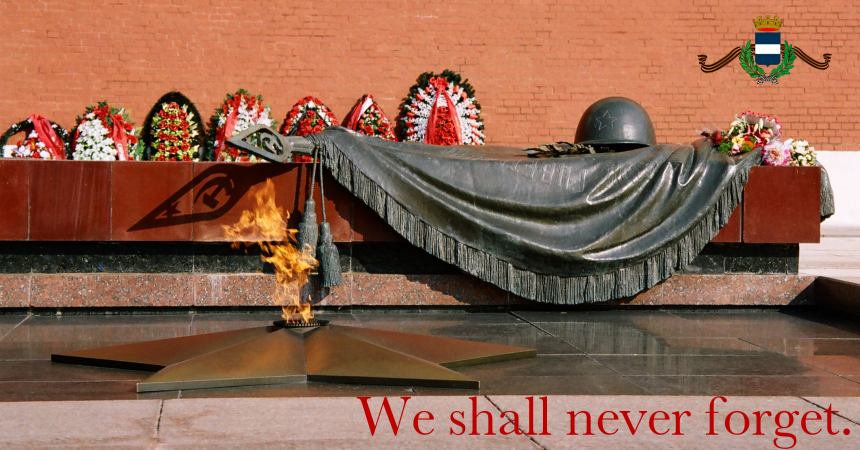 The traditions of the day are mixed with sadness and celebration. This bittersweet combination is resolute in reminding us the true cost of war. As we celebrate the demise of Fascism by a Socialist nation so badly attacked, with losses reaching 30 million by some estimates (compared to Nazi Germany with 10 million), we are reminded of the lives lost and those still affected today. The truth about Remembrance Day in Sandus is that the loss of life felt by the Soviet Union is a part of a larger symbol: how Socialist nations must stand prepared for peace and how war must be resisted at all costs. The tremendous loss of life, symbolised by our image of Zoya Kosmodemyanskaya, is a reminder to Sandus that war should never be considered as a solution and aggression should be resisted at all costs.

The memories of the Great Patriotic War, as it is known in former Soviet Union, are echoed in all wars. From Vietnam, to Iraq and Afghanistan, war should never be thought of as a visionary or ideal quest. Indeed, in Sandus, we are very much committed to peace for we have no military — not even a titulary one. In Sandus, we recognise that few respect the Soviet Union for the amount of life they lost as a result of a war thrust upon them by Operation Barbarossa. Surrounded by a populace who know little of the suffering of the Soviet People, Sandus commemorates this holiday to their memory for the grander memory of all. This “Crusade against Bolshevism”, as it was known in Nazi Germany, has led to hellish stories still told today.

When we consider Zoya Kosmodemyanskaya, a Soviet partisan in her teens who endured ordeals of pain and ultimately death, we remember so many other stories as hers. Stories of children, locked in the Siege of Leningrad, whose only hope was to submit to cannibalism and starvation or perish; or the story of the Brest Fortress, a fortress that stood out to the last bullet when the front had passed hundreds of miles past it. We should consider the stories of soldiers and civilians, recall the names of known ordeals. It is by their stories, their hardships, that the suffering of countless others can live on, when even they are not of the same war. When we consider other countries — Korea, Viet Nam, Iraq, Afghanistan, Libya –, we are mindful that no war is the same — yet they are all the same. Thus is the suffering of trauma and of hauntings of death that live on in the annals of memory.

This tradition of ours is under attack. We stand out like the Brest Fortress: whilst others berate this tradition for what came after the war, we remember the suffering during the war — and this tradition, this most high and sacrosanct holiday, shall never be concluded. Whilst others have traditions of remembrance on the date marking a war fought over nationalism and empires, we have a tradition of remembrance marking a war fought over utter survival. The Grand Duke of Zealandia, attacking this tradition of ours, has claimed that we have been deluded by Soviet propaganda, somehow after the demise of that nation, and that our State lacks analytical reasoning: there is no higher analytical reasoning than going against the grain of macronational society to establish, as we have done, our own nation and national traditions. Whilst a few attack this tradition and use it as a petty political means to undermine the integrity of our nation and of our national path to advancement and liberation, the vast majority of statesmen agree with Sandus: this day is indeed sacrosanct.

Of those surveyed to see if they agreed with the views of both Anthony Fowler and Frederic Bayer, none did agree. In fact, responses ranged from respecting this day as a sovereign right of the Sandum nation, to opposing their theoretical objections. Most recognise it as a day of great sadness and celebration, as we do. As we mourn the loss of all war dead on this day, and their unnecessary deaths, we celebrate the lives lost and the survival of the world’s first Socialist nation that, in just the next few years after the war, would make leaps and bounds to become the most powerful nation in the world. Support the Soviet state or not, this war perpetuated a Socialist nation forward, even at the emotional cost of millions. The fact that the Soviet Union became such a power whilst rebuilding from the war is testament to the will of all Socialist peoples, Sandus included, and their triumph over suffering and all odds. No matter the power in rebuilding or the argument over the integrity of the USSR, Sandus respects the commitment of the average citizen to the defence of their nation and to the construction of their nation: two virtues we perpetuate in Sandum society.

The historical revisionism and the biased history of this time should not cloud the clear truth of commemorating the Great Patriotic War and all those who perish from violence, aggression, and war. In Sandus, we remain committed to peace and to the virtues of Socialist society. Even as we are on the end of aggression and hostility from both national leaders, we have noted how — as an example — the Zealandian Grand Duke is not as committed to peace as he leads on to be. Whilst they condemn us for having this sacred day as our most important State holiday, they claim to remain committed to the objective of peace; however, in doing so, both have violated the respect Sandus has for both nations’ traditions and have refused to cooperate with the utmost concept of peace in concerns of Sandus. When this fact was made clear to them, M. Fowler constructed this paradox: Zealandia pursues peace, just not with Sandus and shall never recognise Sandus further. As Sandus is the butt-end of this sort of immature aggression and a violation of the respect of national sovereignty and self-determination, we have remained committed to the respect we have for their rights of sovereignty and self-determination. We continue to recognise the Zealandian state and its government, but we shall no longer yield to their right to mutual respect when our nation is belittled and our national traditions undermined out of rash and irrational behaviour.

None the less, the staunch majority of people recognise and respect this Sandum tradition. There shall, none the less, be no changes to it. This is the first time that major objections have been raised by segments of the intermicronational community and, yet, a larger segment of the intermicronational respects the Sandum nation’s tradition and rights. The state of this tradition remains strong from today forward and it will be continued to be celebrated, despite the aggression against the holiday.

We would like to thank all Sandum citizens for celebrating this holiday with us and congratulate all on 68 years since the Victory over Fascism. As we move on, we shall remain committed to peace and to the building of a strong Socialist nation. Ura!