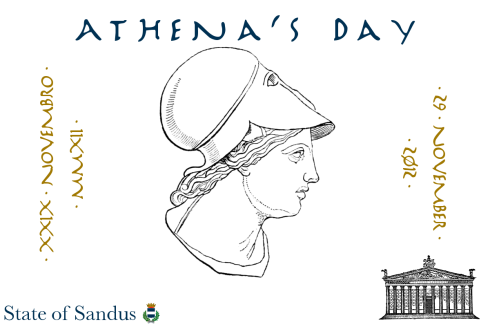 Athena’s Day is a Sandum-created celebration and festival. Derived from the ancient Athenian festival of the Khalkeia, the Khalkeia (or Chalceia) was celebrated in the autumn around XXIX Novembro — when Athena’s Day is. Athena Ergane, the Weaver Athena, and Hephaestos are the patrons of the day due to their role as being patrons of the arts. On this day, crafts made in the past year and the materials used to make them would be presented before Athena Ergane and Hephaestos — the gods of arts, crafts, creative expression, and ingenuity — and both would be blessed. On this day in ancient Athens and ancient Attica, the workshops of the craftsmen and artisans would be closed. The peplos — a style of Greek dress — of the statues of Athena would be begun to be spun on this day and would be dressed on the statues on a later festival, the Hekatombaion; in Sandus, the Khalkeia and the Hekatombaion are united into Athena’s Day. A peplos is made for the images of Athena in the State and, in a rite, the Sôgmô, acting through his role as Sacra Flameno, would bless the State of Sandus as if an art or craft before Athena and Hephaestos.

This year is especially momentous. It is the first time the Collegio Sacerdae will consecrate a shrine: the State Polytheist Shrine to Athena and All the Gods inside the physical Office of the Sôgmô. Working with the symbol of the festival as a day of blessings for the arts and for the crafts and a day of worship of the divine patrons of the arts, the consecration of this Shrine on this day will present the Sandum nation as an art, a craft, and a work of creative expression that deserves the blessing of Athena Ergane and Hephaestos. The new Shrine will be placed in the Office of the Sôgmô, behind closed doors; the Shrine will be opened on major religious and cultural holidays: the Armilustrium, Athena’s Day, the Saturnalia, the Dies Natalis Solis Invictus, the Lupercalia, the Matronalia, the Floralia, the Lemuria, the Vestalia, the Poplifugia, the Opiconsivia, and so on.

Historically, on this day, a long-term project — such as the peplos Athena would wear — would be begun and such a project was made last year with the beginning of the calendar of the Collegio Sacerdae. With the advancement of Sandum culture in the last year since the last Athena’s Day, the entire Sandum nation and state is a long-term project worthy of Athena and Hephaestos, their recognition, and their benedictions.

The rite on Athena’s Day will be rather short but will use the symbols of salt and water as purifying substances. The Orphic Hymns to Athena and Hephaestos will be recited. A special addendum to the traditional rite will be made for the consecration of the altar. Pictures of the preparations will be added to Sacerdotium and to the State of Sandus Facebook page.
For more information, the Greek Neo-Pagan site Temenos has garnered information on the Khalkeia, the festival which sets the basis for the festival.
To see the Collegio Sacerdae’s calendar of religious and cultural holidays, visit here.