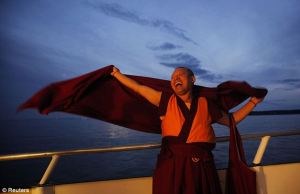 Today marks Chökhor Düchen as the fourth day of the sixth Tibetan Lunar month. According to tradition, it is said that on this day the Buddha first taught his Dharma at Sarnath, seven weeks after reaching enlightenment. This teaching of the Buddha is known as the Dharmachakra Pravartana Sutra, meaning ‘Setting the Wheel of the Dharma in Motion’. In the Tibetan tradition, today is auspicious where prayers are multiplied 10 million times. Often, many Buddhist sanghas and communities come together to conduct what is known as “live release” in order to raise their own karma and that of the animal being released, which are often bought for food. Many times, caged animals or insects are released or, even, many lobsters are released.

To mark this auspicious holiday in the Tibetan calendar and to mark Neptunalia, which falls on today and tomorrow, the Sacra Flameno shall undertake prayer and teachings beginning at 18:00 SLT and ceasing at 22:00 SLT. Here is the schedule of events:

18:00 SLT – Beginning of a Tsog at le Palaso d’Etato. Tsog prayers shall be done in English, where some shall be conducted in Tibetan. The remaining time shall be spent accumulating the Sevenline Prayer and the Prayer to Clear All Obstacles.

20:00 SLT – Meditation and accumulation of mantra and prayers. Finish with the Dharmachakra Pravartana Sutra again.

21:00 SLT – Recitation of prayers and hymns to Poseidon and Neptune for Neptunalia.

21:30 SLT – Recitation of Namo Amitabha with Second Life sangha, finish with a three minute recitation of Shakyamuni’s mantra and a final prayer to Poseidon.

The event shall also be broadcasted live on Channum Unum.